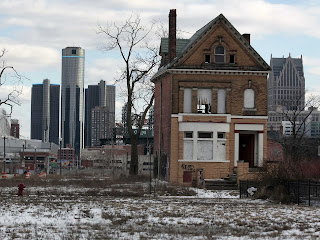 The last part is here:   Megatrend - Depression pushing through

Before the July bankruptcy filing, nearly 40 cents of every dollar collected by Detroit was used to pay debt, a figure that could rise to 65 cents without relief through bankruptcy, according to the city.

Detroit is eligible to shed billions in debt in the largest public bankruptcy in U.S. history, a judge said today in a long-awaited decision that now shifts the case toward how the city will accomplish that task.

Judge Steven Rhodes turned down objections from unions, pension funds and retirees, which, like other creditors, could lose under any plan to solve $18 billion (all figures US) in long-term liabilities.

But that plan isn't on the judge's desk yet. The issue for Rhodes, who presided over a nine-day trial, was whether Detroit met specific conditions under federal law to stay in bankruptcy court and turn its finances around after years of mismanagement, chronic population loss and collapse of the middle class.

The city has argued that it needs bankruptcy protection for the sake of beleaguered residents suffering from poor services such as slow to nonexistent police response, darkened streetlights and erratic garbage pickup -- a concern mentioned by the judge during the trial.

Before the July filing, nearly 40 cents of every dollar collected by Detroit was used to pay debt, a figure that could rise to 65 cents without relief through bankruptcy, according to the city.

Announcing his decision, Rhodes said Detroit has a proud history.

"The city of Detroit was once a hard-working, diverse, vital city, the home of the automobile industry, proud of its nickname the Motor City," he said.

Detroit no longer has the resources to provide critical services, the judge said, adding: "The city needs help."

Pensions can be cut

Rhodes' decision is a critical milestone. He said pensions, like any contract, can be cut, adding that a provision in the Michigan Constitution protecting public pensions isn't a bulletproof shield in a bankruptcy.

The city says pension funds are short by $3.5 billion. Anxious retirees drawing less than $20,000 a year have appeared in court and put an anguished face on the case. Despite his finding, Rhodes cautioned everyone that he won't automatically approve pension cuts that could be part of Detroit's eventual plan to get out of bankruptcy.

There are other wrinkles. Art possibly worth billions at the Detroit Institute of Arts could be part of a solution for creditors, as well as the sale of a water department that serves much of southeastern Michigan. Orr offered just pennies on every dollar owed during meetings with creditors before bankruptcy.

Behind closed doors, mediators, led by another judge, have been meeting with Orr's team and creditors for weeks to explore possible settlements.

Much of the trial, which ended Nov. 8, focused on whether Orr's team had "good-faith" negotiations with creditors before the filing, a key step for a local government to be eligible for Chapter 9. Orr said four weeks were plenty, but unions and pension funds said there never were serious across-the-table talks.

"The governor took more time to interview the consultants to help the city with restructuring than they took to negotiate the restructuring itself. That's absurd," attorney Sharon Levine, representing AFSCME, said at trial.

An appeal of Rhodes' decision is a certainty. Opponents want to go directly to a federal appeals court in Cincinnati, bypassing the usual procedure of having a U.S. District Court judge hear the case.

Orr, a bankruptcy expert, was appointed in March under a Michigan law that allows a governor to send a manager to distressed cities, townships or school districts. A manager has extraordinary powers to reshape local finances without interference from elected officials. But by July, Orr and Gov. Rick Snyder decided bankruptcy was Detroit's best option.

Detroit, a manufacturing hub that offered good-paying, blue-collar jobs, peaked at 1.8 million residents in 1950 but has lost more than a million since then. Tax revenue in a city that is larger in square miles than Manhattan, Boston and San Francisco combined can't reliably cover pensions, retiree health insurance and buckets of debt sold to keep the budget afloat.

Donors have written checks for new police cars and ambulances. A new agency has been created to revive tens of thousands of streetlights that are dim or simply broken after years of vandalism and mismanagement.

While downtown and Midtown are experiencing a rebirth, even apartments with few vacancies, many traditional neighbourhoods are scarred with blight and burned-out bungalows.

Besides financial challenges, Detroit has an unflattering reputation as a dangerous place. In early November, five people were killed in two unrelated shootings just a few days apart. Police Chief James Craig, who arrived last summer, said he was almost carjacked in an unmarked car.

The case occurs at a time of a historic political transition. Former hospital executive Mike Duggan takes over as mayor in January, the third mayor since Kwame Kilpatrick quit in a scandal in 2008 and the first white mayor in largely black Detroit since the 1970s.

Orr, the emergency manager, is in charge at least through next fall, although he's expected to give Duggan more of a role at city hall than the current mayor, Dave Bing, who has little influence in daily operations.

My Comment:
The depression is seriously biting the largest powerhouse of the world. With the consumption at its lowest, the rest of the world will find it hard to cope. With no demand from the big boys, the smaller boys are going to die.

Once upon a time, a little fucken island thought out a very cle-wer plan. The fuckens thought that by having large corporations to set-up factories on that little island. They could supply large labour and at the same time, steal from these corporations technological know-how. Years gone by, hundreds of corporations moved out after the tax incentives ended, leaving only an empty shell, with zero technologies. The fuckens ended up having their cocks jammed in their mouths. How are they going to feed the populace since these assholes are not migrant workers but shitizens, i.e., they got no place to go after getting old?

You might think that I am having 20-20 vision after the event (事后孔明). It is not true. I never allow my skill and knowledge to be used by these fuckens. Since I had achieved nothing, I can't prove my ability, but neither can anyone disprove my ability. So let's keep it that way. I am merely talking cock for those who don't know me.

This depression is going to last for a long while. Even with money printing, it's not going to help. We all going to have 16 years of fun. Instead of complaining money not enough, why not use that little money and put it to good use.

Hint:   Have you ever bought a nice house with large freehold land with only a four-figured sum today?

If you can't even solve the riddle given above, please don't say you have ever arrived. Seriously you are not even a good yellowskin to start off with. A good yellowskin is hard-working, humble, resourceful and cunning. 學而不思則罔，思而不學則殆.
Posted by Unknown at 13:16