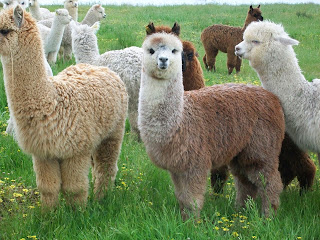 The last part is here:   Passion business IV - Black Périgord Truffles (as a)

I have decided to play in this business-type.

Negatives:    The fleece produced by alpacas are superior products but poorly priced. The farmers are currently not into fleece production but nonsensical pure bred competitions. Although this is a negative, one can turn it around by going into pure fleece. But, the current fleece price is very poor, after sale (about 6-8 lbs), the money can only feed the animal for the year. There is no profit. The only profit is in their off-springs.

Investment Returns:   Assuming both the male and female are sold at the same price, the reason being that some bucks are good priced, which sometimes the female also fetch good price. On the whole, female being seen as reproductive usually fetch better prices. But, for analysis, let's leave it as equal. Simple and easy to understand. It is not impossible.

Let's start with 3x3-years-old females and 2x3-years-old males (all productive); all males not buck quality would be sold as soon as possible; all females should be sold by the 8th year, else the price and fleece are crapped; the ratio of males and females are 1:1 equal chance for each sex; always choose one or two young strong bucks to sex all females:

As for the feed, it is almost free as the land area is plenty.

After a while, the herd is almost free. Every year, the off-springs would be enough to feed you. There is no IRR to talk about. It is just free money like an orchard.
Posted by Unknown at 02:04